Eleanor’s Cake (Which Ate Her) 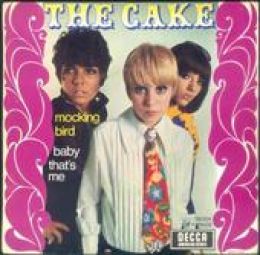 Did you ever wonder who or what was the inspiration behind Kevin’s beautiful song ‘Eleanor’s Cake (Which Ate Her)’ from the ‘Joy of a Toy’ album (released 1970)?

Eleanor Barooshian (April 2, 1950 – Aug 30, 2016), also known as Eleanor Baruchian and as Chelsea Lee, was a member of all-girl band The Cake, formed in New York in 1966.The other band members were Jeanette Jacobs and Barbara Morillo. Their repertoire consisted of R&B standards as well as their own compositions, which have been described as “baroque pop” with madrigal style vocal harmonies. They released two albums on the DECCA label, ‘The Cake’ in 1967 and ‘A Slice of Cake’ in 1968. Eleanor also contributed backing vocals to the outstanding recording of “Why Are We Sleeping” on Soft Machine’s first album. 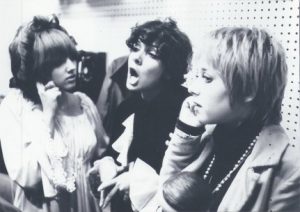 The Cake at Gold Star Studios

In 1967, Eleanor appeared in ‘You Are What You Eat’, a documentary film produced by Peter Yarrow of folk group Peter, Paul & Mary. In the film, Eleanor performed the Sonny & Cher hit ‘I Got You Babe’ with 1960s personality, Tiny Tim. She sang the male part while Tiny Tim sang the female. Yarrow cast the two singers after seeing them perform at Steve Paul’s ‘The Scene’ in New York.

It would seem likely that Kevin Ayers first met Eleanor and Jeanette Jacobs in New York, when the Soft Machine were supporting Jimi Hendrix in 1968. Jeanette was romantically involved with Hendrix at the time. 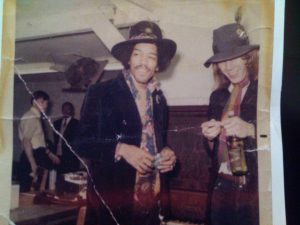 Jimi Hendrix and Kevin Ayers, circa 1968

Following the break-up of The Cake in 1968, Eleanor Barooshian and Jeanette Jacobs toured with Dr John and subsequently moved to the UK, where they became part of Ginger Baker’s Air Force. Eleanor also recorded an album in Japan with Tetsu Yamauchi. Sadly Jeanette Jacobs-Wood died in 1982, aged only 32. In 2006, Eleanor and Barbara Morillo reformed The Cake for a one-off Hendrix tribute show in New York.

When news of Eleanor’s passing became public, in September 2016, Bill Tasker, who had corresponded with her during the 1990s, posted in the Kevin Ayers Appreciation Society:

“Eleanor did backing vocals on the Softs’ ‘Why Are We Sleeping?’ Jeanette Jacobs, one of the other members of The Cake, was Jimi [Hendrix]’s lover around this time. Afterwards they stayed in the UK for a while singing with Ginger Baker’s Air Force. She [Eleanor] was very proud of the song Kevin dedicated to her. And looked back fondly of her time in ‘Cake’.”

Previous post: A Hardcore Soft Machine fan and his recordings