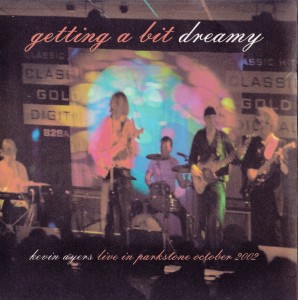 About a month ago we received a comment from Terry Collins from Jakarta, Indonesia. He said “I have a recording of Kevin playing at Mr. Kyps in Poole, Dorset on 25th October 2002″ – excited? Oh yes! This must be one of the most recent full recordings of a Kevin Ayers gig there is. There is a zip file you can download which contains 16 audio tracks, a Word document which explains how it came about and a front and back cover, if you choose to make your own CD. Here is a portion from the Word document:

” I live in Jakarta but noted this gig was taking place in the town to which a former colleague, co-author and still (2014) very good friend had moved back to. At my suggestion, he went, knowing little about Kevin. With his pocket super-duper Sony Walkman – I really don’t know the technicalities – my friend recorded the evening, and the quality is better than many other ‘bootlegs’ I’ve heard.

On the carefully worded CD cover there is some great stuff, check this:

…I went to see The Kevin Ayers Band at Mr Kyps in Poole the other night and I was totally impressed by the combination of an audience completely at ease to be delighted and a group of sensitive and professional performers who evoked between them an unusually intoxicating atmosphere. Or hundreds of them. It seemed that we were all congratulating one another for having arrived this far. So many memorable moments, but ‘Star’ was perhaps the song that moved me the most. I’d never heard it before….I do know that I have hardly met anyone who, once introduced to Kevin’s music, does not like it. My experience at Mr Kyps the other night was certainly one of the beneficient highs of my life.
Tishulananda Paul Mc Mullen – And thank you for reading this !

I’ve listened to this quite a few times and it is really great. This is from the 2002 tour that Kevin did with his Belgian band which included Marvin Siau. If you leave your email in any of the ‘get updates’ boxes on this site we will send the download over to you straightaway. Please comment below, it all helps.

Next post: Diamond Jack and the Queen of Pain – Reissue