All This Crazy Gift of Kevin Ayers Memorabilia 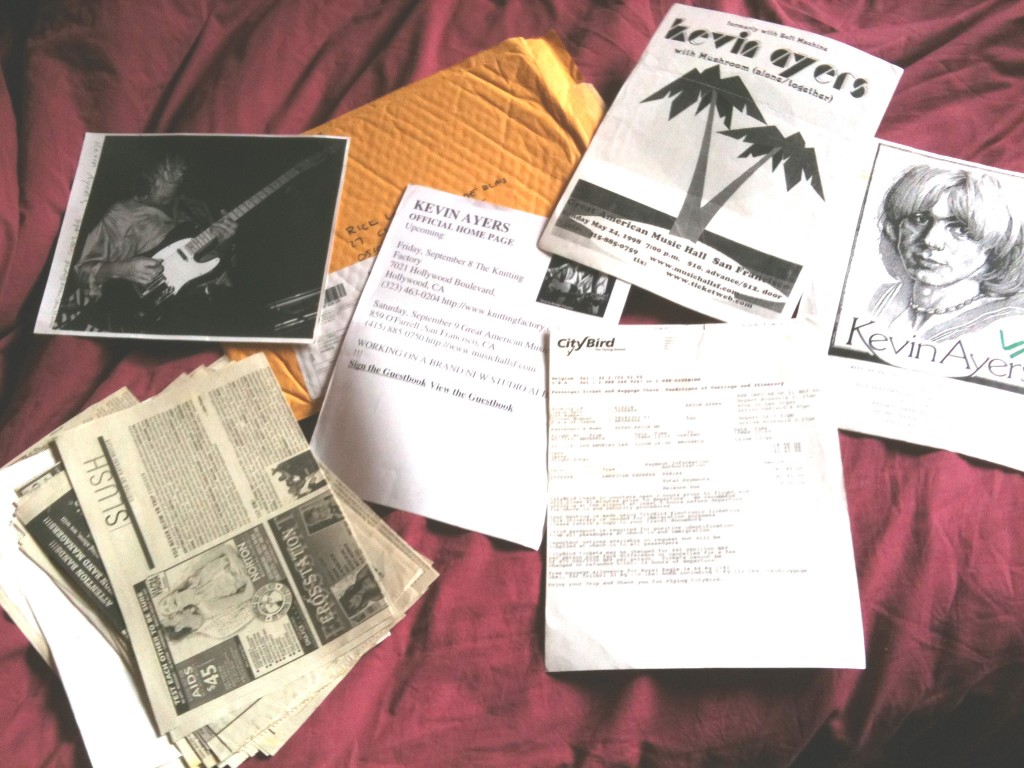 I have been in communication with Richard Derrick for quite a while now, since April 1st 2014 to be exact. He even sent us one of the remaining CD copies of Kevin Ayers Alive in California too. Richard produced this album and also played bass on Kevin’s Californian tours. If you are lucky enough to have a copy of this album you will have heard the excellent bass playing by Richard and indeed the whole band.

Richard wrote me an email on June 28th saying,

“I finally went through all my memorabilia.  Sorry it took so long, but it’s done now.  I sent you all the newspaper clippings I had about Kevin’s California shows, including flyers, reviews and a cool photo from 2000.  Rather than send copies, I sent the originals – this stuff has been sitting in a drawer for years, just taking up space, and I’d rather get to someone like you who will do something with it.  It’ll probably arrive sometime late next week.”

Richard followed up with a quick email saying, “Before I sent you those clippings, I took one last look at them.  I never noticed before, but when Kevin played at Thai Bistro in December 1993, jazz musician Roy Ayers was playing the same night across town.  What’re the odds…?”.

Excited? Well I sure was! I replied, “…If you are happy to send us the stuff we are very happy to receive it! We will make sure that the stuff is well looked after and enjoyed by as many people as possible.”

Today the package arrived. How strange it felt to handle a CityBird letter with Kevins updated flight details from Brussels to Oakland/Los Angeles to Brussels. Other than start building a Kevin Ayers Museum the best thing we can do at the moment is slowly work through all the material, scan it and post it here. I’m sure there will be some interesting comments and memories from you all.

Thank you Richard, this really is an amazing collection of stuff.