Richard Derrick and Kevin Ayers a few hours before Kevin’s flight home after the 1998 US shows, in Richard’s back yard, San Pedro, California.

We had an email on the 1st April 2014 from Richard Derrick from Los Angeles, that was no April Fool’s joke. In his email Richard said,

“You had posted on the music forum I frequent, on an Ayers thread last year. I organized and financed Kevin’s California mini-tours in 1998 and 2000, and also played bass at at Los Angeles shows. Kevin stayed with us, and as you well know, he was a very nice person. I will cherish those memories forever.”

It’s always great when someone who has met Kevin gets in touch but the email gets more interesting,

“The reason I’m writing is because I produced and released a live CD in 2004 entitled “Alive In California” from the highlights of these shows (plus two songs from one of his 1993 solo shows in L.A. – I produced those concerts as well).” 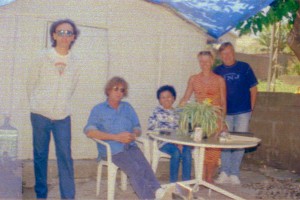 Richard’s CD is now out of print although there may still be a few stray copies of the Ayers album on Amazon and other distributors, but once those are gone, there will be no more copies to replace them. Richard’s label, Box-O-Plenty was shut down in 2011 and he can’t legally sell it anymore, which is why we need help to keep this valuable recording alive!

Richard has tried contacting various people who he thought might be interested in re-issuing this album, but has so far drawn a blank. This is a real shame as it such a precious set of recordings.

If you know of anyone interested in licensing or buying this release, feel free to put them in contact with Richard and myself at KevinAyers.ORG. The album is 66 minutes long, which makes it the perfect length for a two-record LP issue.

Richard very kindly sent one of his remaining copies to us to listen to and it really is quite incredible – you can read more about it the albums section: Kevin Ayers Alive in California.

Richard’s email was very touching in many ways, and he concluded it in a beautiful way,

“Thanks for keeping Kevin’s music out there. I am sad that he is no longer here, and I’m sure his family is even sadder … his spirit remains through his great art.”