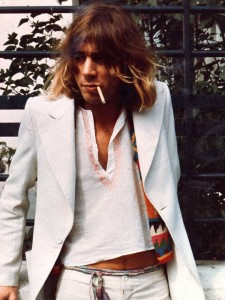 With thanks to Steve and the Canterbury Ayersians…

It begins with a toast and it ends with a …. hangover, well some jaded Canterbury pilgrims suffering from a lack of sleep. Six of us celebrated what would have been Kevin Ayers’ seventieth (‘Keventieth’ as coined by John) birthday last weekend in Canterbury, drinking some wine and having a good time.

We collected John and Anne-Marie on Friday off the Eurostar at St Pancreas (hic) Station and started toasting pretty much there and then. Dinner had a Canterbury flavour. First up, Curtis’ gazpacho recipe (thumbs up all round, Curtis). Kippers and salmon fish cakes followed (Alain Berthe of the Starvin Marvin Band tells a nice anecdote of when the band were touring in the north east of England and Kevin took them to Whitby early one morning to see the famous Dracula abbey and for traditionally smoked kippers. Smoked fish, breakfast, Frenchman, anathema). John is one of those po-faced (we liked that word over the weekend, it often preceded any mention of post-Wyatt Soft Machine) fusion freaks so we finished off with rhubarb and banana crumble.

After a shortish night we headed off down to Canterbury, where several Kentish ales were sampled as we waited, waited, wwwwaited for Paul and Claire, stuck on the Queen Elizabeth II bridge on their way down from Yorkshire. The sun was shining and the ales were good, no problem.

Proceedings were finally kicked off with an Ayers themed picnic in the grounds of the University of Kent, Steve Hillage’s alma mater, and not 200m from Tanglewood, the Hopper family home. There was champagne though no valium, smoked oysters without the flying fish, pa amb oli, smoked duck (Oh Wot A Dream), but best of all were some ‘fine de Claire’ specials: Caribbean Moon scotch eggs, Star-shaped pizzas and a wonderfully tasty ‘I’d Rather Go Fishing’ quiche. What imagination.

We somehow managed to stir ourselves and headed into town to see the sites. To Anne-Marie’s squeals of delight we got front seats on the top deck of the bus into Canterbury. First up The Lady Luck, formerly The Three Compasses, a pub Kevin, Robert Wyatt and Hugh Hopper had been ejected from for having long hair. We didn’t stay long either – a hen party had settled in around the bar. A quick look at the cathedral. Then the search was on for Stewy’ s stencil of Robert Wyatt, and The Beehive. A jet propelled search with no map and four improvising guides – we managed quite well without even one of those compasses. The stencil is in immaculate condition. Concerns that it might have been graffiti-ed over in the two years since it was sprayed onto the wall were allayed. Some things, it would appear, are sacrosanct to just about everyone. It stands right next to The Kudos Chinese restaurant, formerly The Beehive Club where the Wilde Flowers and early line-ups of Caravan and Soft Machine (Mr Head) had performed.

All thirsty work. Finding a pub in Canterbury is quite easy but Paul and Claire uncannily found us one with a beer garden, a free table and some very palatable Whitstable ale in less time than you could say ‘Turn The Lights Down’. Three rounds later, and via the off-license, it was back to the Halls of Residence at the University of Kent to listen to some music and drink some more wine. Had we been allowed to smoke, it would have been just like the old days for the former students amongst us – Another Saturday Night, as Paul quipped. Paul now opened up his Pandora’ s crate of Canterbury CDs, which he had astutely asked roadie Steve to lug across the car park and up three flights of stairs, and DJ’ed through most of the night. I can’t say I recall the running order or even the playlist, but certainly The Wilde Flowers got us under way with their version of You Really Got Me, recorded not 200m away at Tanglewood. As Paul pointed out; exactly 50 years previously (summer of 1964)*. This is quite likely to be the earliest recording that Kevin features on and which was, of course, to morph into the celebrated We Did It Again. Some Caravan (In The Land Of Grey And Pink) followed (the golf course was within range), some Gong (from You), Daevid Allen (Wiseman In Your Heart), Robert Wyatt (all of Rock Bottom, as I recall), some Pierre Moerlen playing with Mike Oldfield, plenty of Kevin (though I can now only recall That’s What We Did), and so on until almost dawn. There may have been What’s Rattlin’ or maybe we just talked about it **. Why were we so short of sunrise and singing a song in the morning? The bottles ran out.

Not everyone made it down to breakfast. A bleary-eyed Paul had us all in stitches: ‘It was a great weekend – until I woke up this morning.’ Simultaneously we all pictured a hand being pushed through a mop of unruly blond hair and a plum basso profondo replacing the northern accent.