Shooting At The Moon: The Collected Lyrics Of Kevin Ayers 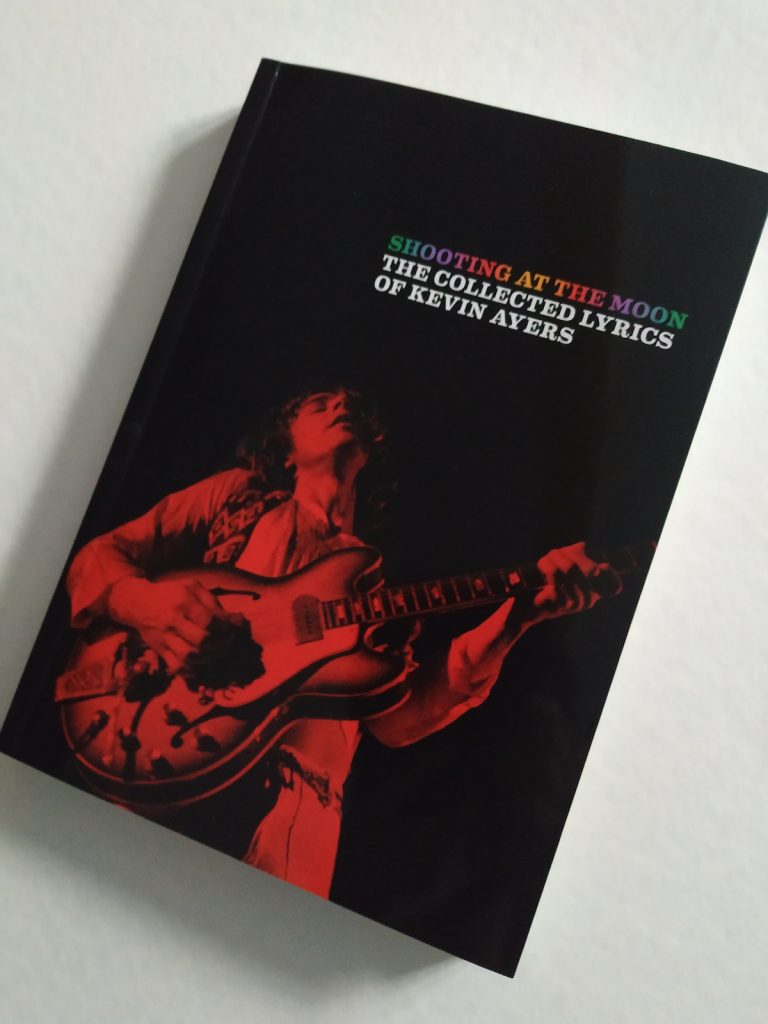 “What can I give you girl?
I can give you my share of time
That’s the only thing that’s mine
To give…”

So, the question is this. If you already own many of Kevin Ayers’ recordings or have been a fan of his music since the 1960s will this lyric book be of interest to you? Or maybe you have recently discovered Kevin’s music and are keen to know more about his life? Does ‘Shooting At The Moon: The Collected Lyrics Of Kevin Ayers’ give you an insight into the personality behind the songs?

Short answer… an emphatic Yes!!! It is a beautiful, very touching book; the spirit of Kevin Ayers shines from every one of its 296 pages. Published by Faber Music Ltd and printed on high quality paper with a luxurious glossy cover, this book is a visual delight, fit to grace the coffee tables and bookshelves of many a home or library. In my opinion it is good value for money at £25 (or whatever the equivalent price is in your local currency). I also like the size of the book (18 cm x 25 cm) which makes it large enough to include top quality pictures but not too heavy to hold when reading. 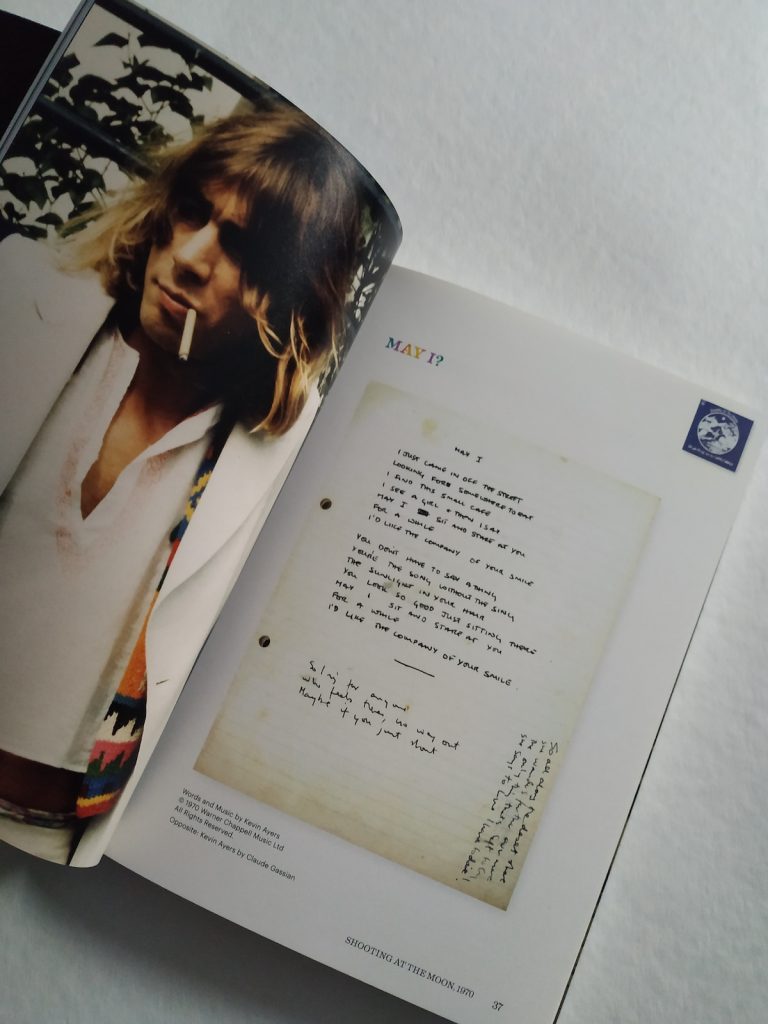 Borrowing its title from Kevin Ayers’ 1970 album of the same name, ‘Shooting At The Moon’ has been lovingly curated by Kevin’s youngest daughter, Galen Ayers. The book features the lyrics from all of Kevin’s solo albums, beginning with ‘Joy Of A Toy’ (1969) and continuing through the decades up to and including ‘The Unfairground’ (2007). Galen recently revealed that her father used to keep a plastic bag of notebooks and photographs which formed his “archive”. Thus, where possible, the lyric book contains scanned pages of handwritten lyrics from Kevin’s original songwriting notebook(s). Sometimes the songs are early versions or alternative versions, with the more well-known album version on the facing page. Additional tracks from album re-releases circa 2003 are also included with the original album tracks.

To ensure that the book was as diverse, lively and appealing as Kevin himself, Galen Ayers invited family members, musicians, friends and fans to contribute to the project. Therefore ‘Shooting At The Moon’ features many previously unseen photographs, scans of posters and gig tickets, recipes for fish dishes and treating hangovers, plus quotations from Kevin himself and appreciations by his peers and other admirers. The introductory notes by Galen Ayers, Robert Wyatt and John Payne help to set the scene for those readers who are less familiar with Kevin’s life and work. 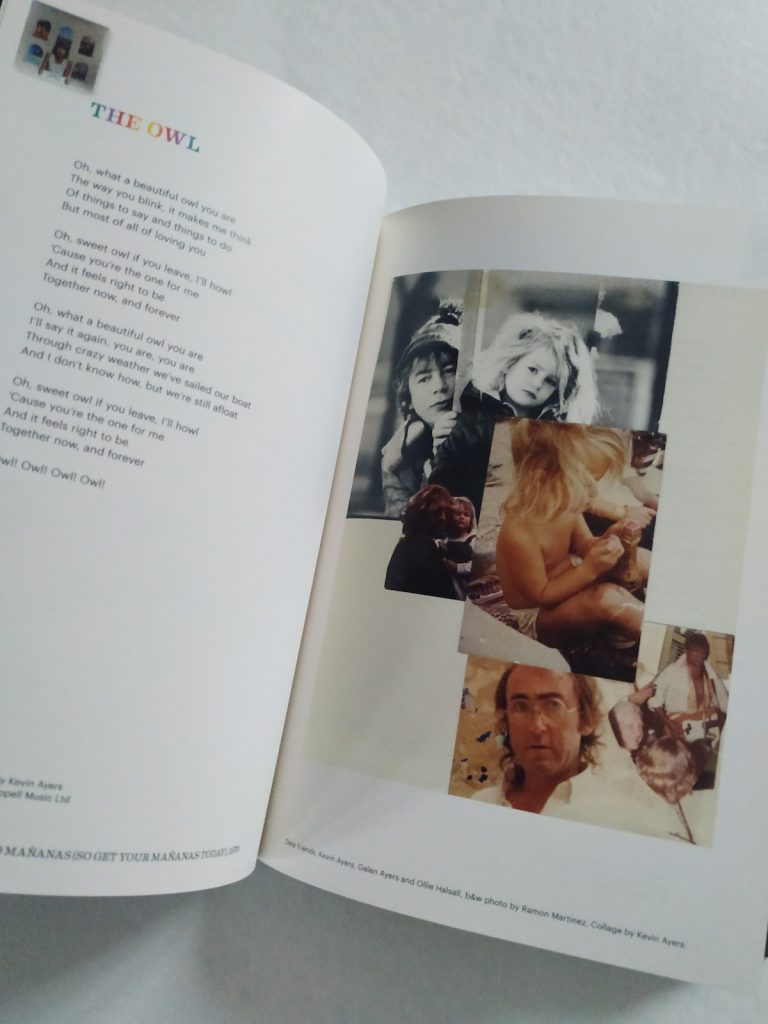 Some of Kevin’s most poignant or intriguing songs have dedications to people he cared about deeply. That’s all I’m going to say on the matter, you’ll have to read them for yourself. And then there’s Kevin’s homemade photo collages of himself and Galen, sometimes with pictures of Kristen (Galen’s mother) or of Kevin’s dear friend and musical collaborator, Peter John “Ollie” Halsall. Bob Dylan even features on one of them! There are no dates on these collages, maybe Kevin made them to take on tour with him or to see him through periods of separation or simply as treasured memories?

The photographs featured in ‘Shooting At The Moon’ are beautifully reproduced, either as large full page “close-ups” or as smaller images on black or white pages at appropriate moments in the story of Kevin’s professional and personal life. In some photographs Kevin is pictured with members of his various bands and other musical friends, on and off stage. Some “classic” images of Kevin, e.g. those by photographer Claude Gassian, rub shoulders with energetic live performance shots, such as the black and white photos taken by Ronald Kienhuis, which I hadn’t seen before. There are also intimate or more casual photos taken by Kevin’s friends and family. Unusual highlights are Kevin Ayers and his “catch of the day” (a fishy tale indeed) and the minimal lyrics of ‘We Did It Again’ printed opposite a photograph of Kevin yawning. 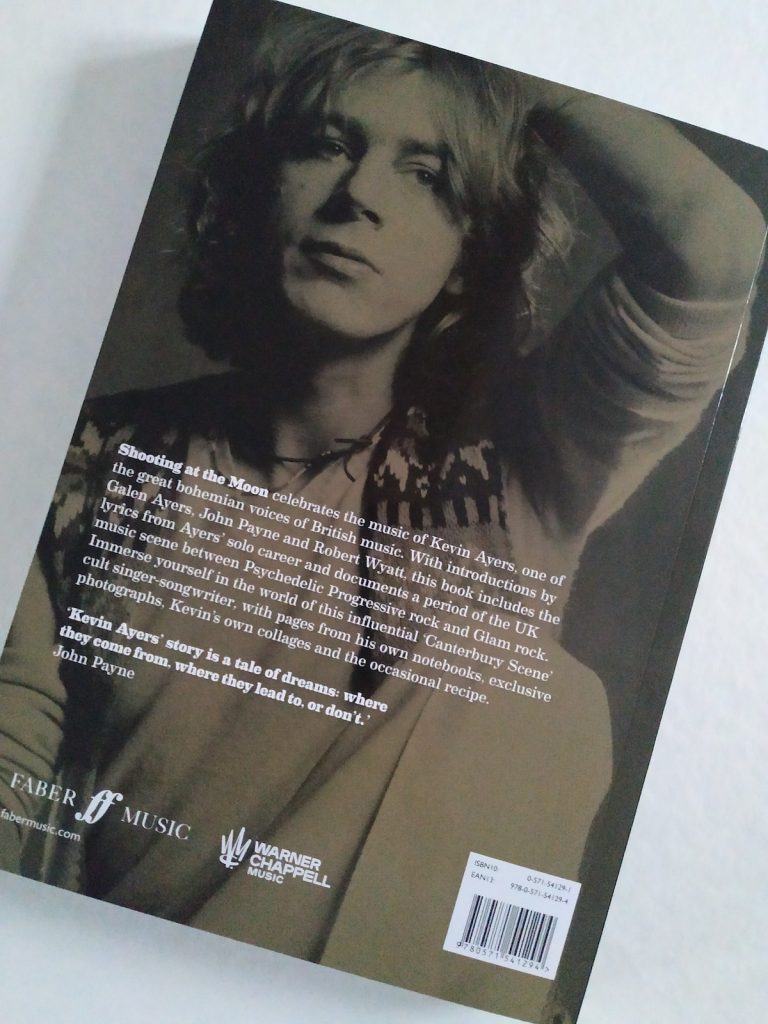 Back cover photo of Kevin Ayers by Michael Putland.

Above all the book references the wit and wisdom of Kevin Ayers. The poetry of his songs speaks for itself. And the best ones? Well they just seem to write themselves…