Shooting At The Moon

Shooting at The Moon was Kevin’s second album after 1969’s “Joy of a Toy.” Shooting at The Moon first hit store shelves in October 1970 and featured Kevin with a new band backing him; “The Whole World.” Which featured Kevin on Guitar, Bass and Lead Vocals, Mike Oldfield on Bass and Guitar, Mick Fincher on Drums and Percussion, Lol Coxhill on Saxophone and David Bedford on Keyboards, whom also featured on Joy of a Toy. Robert Wyatt also makes an appearance in “Colores Para Delores”

The album starts off with sounds of the street and cars and starts with some nice guitar rhythm and “May I?” begins. This is a soft love song about Kevin meeting a girl at a café. This has some of the finest bass playing ever recorded, done by the one and only Mike Oldfield. Lol also adds some saxophone and some good woodwind parts. Following is “Rheinhardt and Geraldine.” Which is the first real Psychedelic rocker on the album. With driving bass playing from Mike and falling under a great groove from Mick. It goes off into an experimental bit which we will see a few times on this album. It features tape loops and almost gives the effect of the record skipping. It then returns with sax from Lol and slows down to a heavy Psychedelic theme with background vocals from ex Soft Machine mate; Robert Wyatt. Coming down from that is “Lunatics Lament.” Opening with a basic drum pattern from Mick. Followed by telephone like vocals that we saw in Joy of a Toy. With some superb harmonics and palm muting from Mike. Under Mike’s improvised playing is Kevin’s bass line and David Bedford’s organ keeping it all together. Mike then goes into a guitar solo with David and Kevin keeping the foundation, it is double tracked and very Avant- Garde, very different for the time. Then it returns to the first verse with a massive buildup of drum rolls, screaming and bass notes.

“Pisser Dans Un Violon” follows with a collage of sounds and experimentation from the Bass and Guitar. It is a variety of bending notes and slapping with little guitar scales and harmonics over top. 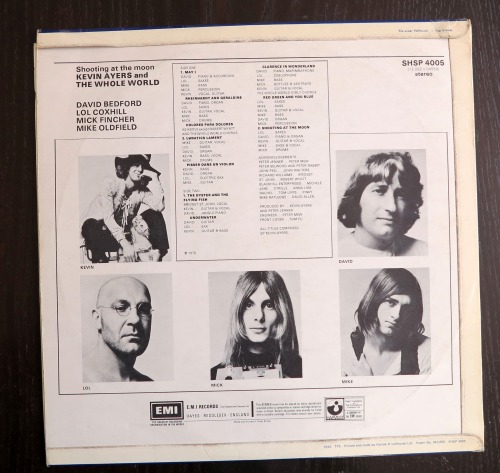 Starts with “Oyster and The Flying Fish”. Possibly Kevin’s best vocal delivery. This is a duet with Bridget St. John. Kevin performed with her once again on “Jolie Madam” Oyster is an acoustic ballad with tambourine from Mick and piano from David. A very strange story about an Oyster who wants to turn into a flying fish and is fed up of being an Oyster. Very typical writing from Kevin and in the Canterbury Scene. It’s light and fun.

“Underwater” is another experimental track, very similar to “Pissers” we see bending of bass notes and guitar harmonics. Possibly to give the listener the feeling of being underwater. Hence the name. Near the end, bird sounds and notes from the next track slowly start to fall into place being “Clarence in Wonderland.” This was an old Soft Machine tune going as far back to 1967. Kevin used to perform this when he was in the band. This version is quite different and has “The Whole World’s” take on the song opposed to the original. Instead of the call and repeat in Soft Machine’s version. There is laughing from “The Whole World Girly Chorus” and Sax fills from Lol.

A very mellow Psychedelic track follows; “Red, Green and You Blue”. Busy bass playing from Mike below an acoustic rhythm from Kevin. We hear some more Sax fills from Lol, copying Kevin’s vocals. Kevin’s vocals are once again recorded through an effect, giving it a very “airy” sound, to add to the Psychedelic picture the song is painting.

To cap off the album is another old Soft Machine staple. Being; “Shooting at The Moon” this was previously known as “Jet Propelled Photographs” and “I’m So Low.” Once again, Kevin takes it and completely turns it into a new song. It is much heavier and less jazzier than the original. Kevin plays the lead riff on guitar to give it a heavier rock sound. Mick is playing harder and less jazzier than Robert did on the original. Although, some Jazz sensibilities were still left over, with Lol’s Sax playing. David falls in with the organ, giving a carnival vibe. Which is a very interesting take on the song. This one gets pretty Psychedelic, this album is probably Kevin’s most experimental.

It is definitely an interesting follow up to Joy of a Toy. Shooting at The Moon will remain a Psychedelic, Progressive, Experimental, Avant Garde and Canterbury staple. This album really paved the way for the Canterbury scene genre. Many artists were to take this experiment form of music and recreate it. This album really showcases Ayers’s talent as a musician and a band leader. It really proves his talent and capabilities and being much more than a singer/songwriter.