Joy Of A Toy

‘Joy of a Toy’ was Kevin Ayers’ first solo album. It was named after a Soft Machine track called ‘Joy of a Toy’ and the first track on this album is called ‘Joy Of A Toy Continued…’ The album contains tracks that went on to be some of Kevin’s most famous and most requested songs. A personal favourite of mine is ‘The Lady Rachel’ and if you were to buy the MP3 or CD version of ‘Joy of a Toy’ you are treated to three different versions of the song. ‘Girl On A Swing’ is also another classic tune that is simple, yet beautiful, and has been covered a few times by other bands including ‘The Ladybug Transistor’. 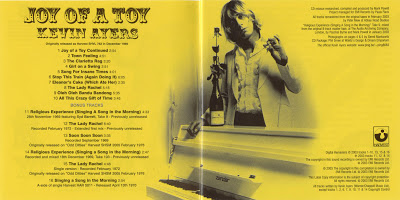 If you don’t own ‘Joy of a Toy’ already I would consider it a very important Kevin Ayers album that you need to have in your collection. It is readily available on CD and MP3 and if you look on eBay there are quite a few copies still available on vinyl too.

The following information is taken from the entry for ‘Joy of a Toy’ on Wikipedia.

All tracks written by Kevin Ayers.