So… on a warm Saturday morning we headed towards Montolieu, in the Languedoc Roussillon region of southern France. The village is situated about 20 km north-west of Carcassonne and near to the Parc National de Haut Languedoc. Having been to Montaulieu the day before, to see one of the mountain places of Kevin’s youth, it was with much heavier hearts that we set off from our friend Eddie’s house in Fa to visit Montolieu. As we approached the village from the south east the only possible soundtrack was Kevin’s wonderful last studio album ‘The Unfairground’. I probably should explain that I never met Kevin Ayers in person or even saw him perform live, although my husband Rick did, so Kevin always seems a few steps ahead of me, elusive, just out of reach.

The house in Montolieu was Kevin’s home for a number of years and sadly it was his last home, as he died there on February 18th 2013. People speak of Kevin leading a reclusive existence in the later years of his life, but there is a world of difference between living alone and being lonely. We asked Eddie, who is a guitarist, whether he had ever bumped into Kevin at gigs in the area and he said that he hadn’t personally, but one of his musician friends had. I rather hoped that Kevin had found a simple routine and a peacefulness that worked for him in this beautiful region of France. I really wanted to see the village built at the meeting point of two rivers, with its second hand bookshops, stunning scenery and great wine.

We arrived in Montolieu just before midday and followed the information signs which led us to the impressive church dedicated to St André. We parked the car and set off to explore on foot. We knew that Kevin’s house was near the Mairie (mayor’s office) and that his favourite restaurant was ‘Les Anges au Plafond’ (Angels on the Ceiling) but had no idea whether the house had been sold or if anybody was living there now.

We found the restaurant with its distinctive pale blue frontage. Here we met Teri, who was sitting on the low wall opposite the doorway, enjoying the sunshine before she started lunchtime service. We explained our mission and she confirmed that the house with a vase of flowers on the doorstep was indeed Kevin’s former home. The shutters were drawn on the ground floor of the tall, narrow, four storey town house.

When planning our trip to Montolieu I had imagined that I might feel emotional at this point. It was one of the missing pieces of the rather colourful jigsaw puzzle of Kevin’s life that I had been putting together since attending the Kevin Ayers Celebration in Deià in August 2013. As I said to Teri, it felt like the end of one thing and perhaps the beginning of something else. Maybe the midday sunshine and the presence of our two slightly hungry daughters kept the darkness at bay. Looking at the house we just felt that it was very important to be respectful of Kevin’s property. No hysterics… it wouldn’t be what he would have wanted. He lived there once, but now he was gone.

What we decided was that Kevin would very much have liked us to enjoy a good meal and a carafe of red wine at his favourite restaurant, having come all this way. Of course the food was lovely and the service was impeccable. We pointed out the white-painted, carved angels on the ceiling to our daughters. Rick and I found ourselves wondering whether visiting Kevin Ayers’s favourite places was a strange hobby and did our own children think we were slightly crazy?

As there were four of us we didn’t sit at Kevin’s usual small table, where a portrait photograph of him in the Languedoc landscape now hangs on the pale blue wall, a gift from his friend and manager, Timothy Shepherd. However a couple did come in and ask to sit there for their meal. Teri told us that Kevin used to eat at the restaurant five days out of seven, always arriving early, just before midday. She also added that for the last three years of his life he was “solitaire”. It was reassuring to think of the staff and customers at ‘Les Anges au Plafond’ being nearby to keep an eye on Kevin’s former home.

Between dessert and coffee I popped outside to take a few photos of Kevin’s house, the restaurant and the street. Our four year old daughter Rosalie followed me and began to dance and twirl around in the sunshine, moving as small children do, to music that only she could hear.

The bookshops were beckoning but our youngsters were restless so we decided to drive out of the village and find a leafy spot, hopefully near a gently flowing stretch of river where we could relax and they could run around. We had watched some interviews with Kevin filmed in such a setting. As we drove out of Montolieu in a north-westerly direction towards Saissac we crossed the bridge over the river. I looked behind me and saw the breathtaking view of Montolieu’s church and houses perched above the trees on the steep riverbank. This was a great place to take a few photographs. 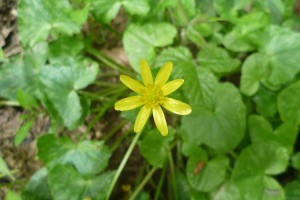 Hearts and a Star

We couldn’t quite find our leafy idyll along the Saissac road so we headed back to Montolieu and along the D64 towards the abbey at Villelongue instead. Here, on the other side of the road from the abbey, was a lovely little field where a shallow river flowed under a small bridge, where the trees had ivy growing up their sturdy trunks and the wild flowers were in bloom. Perfect. The children had predictably fallen asleep in the back of the car so I wandered down to the river and listened to nature’s music, the slow rushing of the river and the afternoon birdsong. Ever the romantic, I was pretty sure that Kevin would have appreciated a moment like this.

All too soon it was time to return to what most people call reality and we decided that our first visit to Montolieu was complete. I really hope to go back later this year when the fields are full of sunflowers so I can leave some on Kevin’s doorstep. I would like to explore the church and the bookshops too. Like so many of Kevin’s admirers I am inspired by his creativity, by the pictures he paints with words and music, charmed each time, just like the first time, by his unique voice. Meanwhile, back in Fa, we rounded off the day with a lovely meal cooked by our friend Eddie. The grown-ups spent the rest of the evening drinking wine (of course) and setting the world of rock’n’roll and books to rights.

Two days later we were relaxing on the beautiful sandy beach at Estartit on the Costa Brava. The sun was shining, the sea was sparkling and a warm, gentle breeze blew across my skin. I suddenly thought of how much Kevin would have liked it and then the tears came. However, in the rock star manner of our wayward hero, I was wearing sunglasses so nobody noticed. But I think I caught up with him there, for a little while.