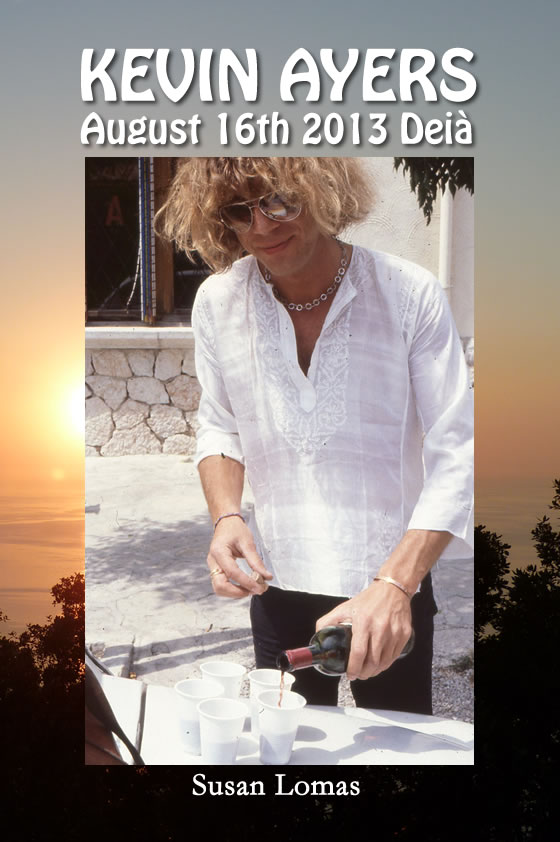 If your countries Amazon is not listed here, you can search by the ASIN, just go to your Amazon and search for 1495220745.

August 16th, 2013: fans of Kevin Ayers gathered in Deià to celebrate Kevin’s life and music with his family and friends. In this book Susan Lomas captures the atmosphere of the celebration in words and pictures. The weekend in Deià also sparked a quest to find out more about Kevin by talking to to his friends and visiting other places where he lived.

“My aim in writing this short book is to capture a moment in time and to keep the creative spirit of Kevin Ayers in the hearts and minds of music lovers for years to come. It’s not a biography, but rather a starting point for anybody who wants to know a little more about Kevin Ayers, his music and Deià. I have included descriptions of my visits to Montaulieu and Montolieu too.

How can I sum up Kevin Ayers? A career spanning forty-five years, the first Soft Machine album, fifteen solo studio albums, sessions for the BBC, several official live albums and of course many more bootleg recordings. Dozens of singles releases and compilation albums with previously unreleased tracks as extras. If one counts ten songs on each solo album, even allowing for Kevin’s habit of re-working tunes, that’s way more than one hundred original songs in his repertoire. A charismatic live performer with a distinctive voice, which matured beautifully, like a fine red wine. Recording contracts with Harvest, Island and Virgin, to name a few companies.

If you simply took the lyrics of Kevin’s songs and published them as a book of poetry it would be an outstanding achievement, full of emotion, wit and wisdom. The fact that these ideas became songs and arrangements which inspired outstanding performances from his musical collaborators needs to be celebrated.

Why isn’t Kevin Ayers as well known as his friend and management company stable-mate from the 1970s, Sir Elton John? No disrespect to Elton, but Kevin wrote the lyrics AND dreamed up the music. I urge you to listen to Kevin’s songs, read his interviews and do what Kevin would want you to do… figure it out for yourself! If you have any time left over to read my little book then I would be delighted.”

Susan’s book is now available as a paperback with beautiful colour photographs and will be available in Kindle format later this week.

Next post: All This Crazy Gift of Kevin Ayers Memorabilia